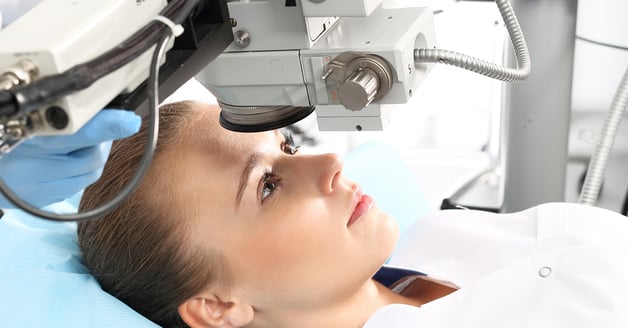 If you’re heavily dependent on eyeglasses or contact lenses, the idea of a 15-minute procedure resulting in perfect vision seems like a dream come true. That’s why over 19 million Americans have elected to receive LASIK surgery to correct their vision. And, with a satisfaction rating of more than 96 percent, the overwhelming majority of those patients have been delighted with the results.

However, the fact is that LASIK is an elective surgery. In other words, you are submitting to the potential dangers inherent to any surgical procedure for less than life-threatening reasons. And, although it’s just 4 percent of LASIK patients that have been unsatisfied with the procedure, that amounts to over 760,000 Americans who have either experienced unexpected complications or failed to achieve the level of vision correction they were seeking.

So, let’s dive deeper into these questions: is LASIK surgery safe, why do people choose to go ahead with the procedure or not, and how can you make the best decision for you?

What does the LASIK procedure involve?

If you haven’t researched it before, you may have an oversimplified view of what the procedure involves. As the term “surgery” implies, a part of your body is going to be cut to facilitate the correction of your vision — in this case, your cornea.

Here’s a quick but detailed video outlining the entire procedure:

As you can see, the LASIK procedure is fairly straightforward from a medical perspective, but it does still involve slicing and burning the sensitive corneal tissue, which is vital to the sense of sight. The point is simply this: LASIK deserves to be taken seriously.

The benefits of LASIK surgery

Obviously, no one would put themselves through the procedure we just described unless there were clear benefits. And, in the case of LASIK surgery, the benefits truly are clear.

According to Dr. Eric Donnenfeld, MD — former president of the American Society of Cataract and Refractive Surgery and veteran of over 85,000 LASIK procedures over the last 28 years — “96 to 98 percent of LASIK patients end up with 20/20 vision. Forty to 50 percent end up with vision that is better than 20/20.”

For the majority of patients, this brief surgical procedure really does let them do without glasses or contact lenses, sometimes for life.

The potential risks of LASIK surgery

In rare cases, however, the experience is not quite so positive.

For most who end up dissatisfied, it’s because the surgery did not ultimately correct their vision enough to go without glasses. Understandably, that’s incredibly disappointing. After all, the surgery can cost a significant amount and isn’t the most comfortable experience in the world. To end up little better than you were, dissatisfaction is a normal reaction.

Learn how you can save!

However, some patients have come away from LASIK surgery with negative effects, ranging from annoying to debilitating.

Some patients experience chronic dry eyes following the surgery. This is a somewhat uncomfortable, but ultimately benign condition that is easily treated with inexpensive over-the-counter eye drops. Others have experienced visual aberrations that can nullify the benefits they gained. For example, some see halos or “starbursts” in their vision, sometimes permanently.

Jason Esveld had the surgery, and within four days he began experiencing pain in his right eye. “It was a deep ache and sometimes like a sharp, hot sensation, like when you have an inflamed ankle after you roll it,” Esveld says. “I would have days when it was so severe that I was pretty much incapacitated. I couldn’t keep my eyes open because of the pain.”

So, is LASIK surgery safe or not?

According to Donnenfeld, LASIK is the “safest, most effective procedure that’s ever existed in ophthalmology.” Alan Kozarsky, MD, is an ophthalmologist specializing in corneas and refractive surgery. He calls LASIK the “second-best 24-hour medical miracle” after labor and delivery.

The statistics clearly back up those claims. And, it’s interesting to note that LASIK is one of the most studied elective procedures performed today, according to the American Refractive Surgery Council. With over 7,000 peer-reviewed studies published to date, there’s clear clinical basis for confidence.

However, as explained above, it’s not considered perfectly harmless.

How to decide whether to get LASIK surgery

The bottom line when making this decision is simple: take it seriously and do your due diligence.

Learn all you can about the procedure itself and about any surgeon you are considering to perform the surgery. During the initial consultation, ask plenty of questions and voice any concerns you have. Make sure you’re establishing realistic and accurate expectations as to how much benefit you can expect to receive.

As the indicators of who is or is not a good candidate for LASIK surgery have become clearer, success rates have gone up. As a result, the most successful surgeons are also the pickiest about which patients they agree to operate on. So, work closely with your eye doctor and any potential surgeon to come to a decision. And, if they tell you you’re not a great candidate for the procedure, don’t push forward anyway.

Even if you’re looking through a pair of glasses, painless and relatively clear vision is not something to take for granted.